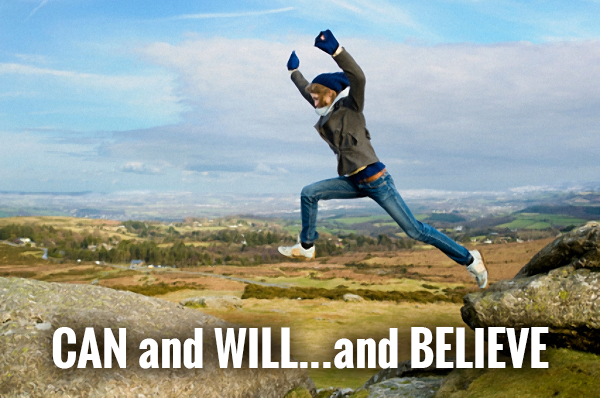 As a very small child, whenever I would get discouraged, I would plop myself down on the floor like a doll made of rags and let out a hopeless wail. “I Can’t…..” would be my pitiful cry. “I don’t know how, it’s too hard, I’m too tired.”

My mother would turn on a dime, narrow her dark Italian eyes, laser beam them into me and say in a voice as commanding as any Military General ever born, ” You CAN and you WILL. HOW does not matter. THAT  we can figure out. Now GET UP!”

Let me assure you, that  was the end of my temper tantrum.

Quitting has never been an option in our family of scrappy little fighters. Raised by my Mother, who raised three children on her own, she had learned to take surprises and situations and wrestle them into the life that she wanted for us. She expected to rise to challenges and goals and she expected no less from us. There were no acceptable excuses. She had an answer for everything.

Being tired? Everyone gets tired. So what, learn to rest, balance and push through.

Being scared doesn’t cut it. Only fools are stupid enough to not be scared.

Not having all the answers is not a reason not to start.  Only the truly stupid think they are wise, the wise know there is always more yet to learn.

In my mother’s world, If you want something you have to go for it. If it is right for you and the people you love, then there is no excuse for not doing it. You CAN and you WILL. And she does.

Then why is it not that simple for the rest of us? Not so black and white? The simple determination to march into battle for your noble cause day after day…why does it again and again reduce so many people to whining, sniveling, crying children?

It took me a long time to learn the third part of my mother’s power.  She had had it all along. It was a mysterious strength that gave her indomitable spirit. That kept her strong and unflinching when she left her secure job-the only thing that put food on the table for her and her three small children-and took her measly $3000 and invested every dime she had to start her own business. She could have FAILED. We could have lost everything. But she had one thing in her back pocket that was so powerful that it propelled her forward and would not let her down.

She had something that most people didn’t have.

She knew that the only way to get from a life that had a steady-but a measly paycheck where she had to work double shifts in a factory and leave her small children home alone was to take a chance. She knew that although the risk was great, that we wouldn’t have insurance at first, that we would have less money to begin with, that we would have no reliable income AT ALL to begin with, that she could make it on her own elbow grease. That something to look forward to with hope was better than a lifetime of looking at what she would have if she changed nothing.

I didn’t understand what that something was at such an early age. She was just my Mom. Maybe I thought that all moms were fierce warriors who went out each day to take on the world.

Later in life, I went into sales. Real Estate sales specifically, although I dabbled my way up to that in other types of sales jobs before that. Sales is HARD. Being rejected is hard. Initiating contacts, talking to strangers, making cold calls, learning contract negotiations, managing files, hand-holding nervous and temperamental clients is all hard and very stressful. The overwhelming majority of Real Estate agents quit within 3-6 months of getting their license. They say anyone can become a Realtor. It takes a good one to stay one. I decided to stack my odds. I hired the industry’s best Real Estate coach in the business to coach me and teach me the tools I needed to succeed. All that I learned in the six years of being one of the top agents in our company is more than a blog could hold.  But one of the major things that I paid good money to learn had been right there at home all my life.

Beverly Buffini is the wife of Brian Buffini, Brian is the head of Buffini & Company, the coaching company I was just referring to. His wife, Beverly, worked and toured with him and spoke at the seminars. She was so inspiring that everywhere she went the crowd went nuts. Beverly grew up to be an All-American volleyball player at the University of Tennessee where she was inducted into the Tennessee Hall of Fame in the first class of women ever to achieve that honor. She went on to become a member of the US National Volleyball Team that participated in the 1988 Olympics in Seoul, Korea. At the time I heard her speak, she was using those same skills of discipline, determination, and focus to juggle raising six kids, writing books, and touring as a motivational speaker. Listening to her speak was one of my greatest inspired moments.

Beverly brought home for me the third part of the ingredients for success in her book, I CAN, I WILL, I BELIEVE. For each of the areas that she wrote about, and spoke about, Beverly outlined her viewpoints on the power behind each of those words. Summarizing, she wrote about:

CAN: to be able mentally or spiritually. She attributes the childhood story, The Little Engine That Could with the basis for CAN. Perhaps not too coincidentally, that story was one that my mom read to us almost every night. The basis of pushing away negative fears and focusing on the positive is the foundation for any dream to come true. In Beverly’s words, ” Particularly in my athletic endeavors, I learned to be patient, that success only comes when and if the I CAN attitude endures over time. Giving up was not an option when things got tough. I had to persist if I wanted to make my hopes and dreams a reality. With that mindset, I could achieve my specific goals.”

WILL: is the reinforcement of purpose, drive and discipline necessary to spring CAN into life. WILL is the Action word that makes it happen. In her book, Beverly spoke about the choices and priority shifting that it takes to keep the WILL going. She talked about sacrifice and risk. She states, “What was the principle lesson I learned from this? That in order to achieve and find fulfillment and enjoyment in achieving, I had to step beyond the familiar and accept personal risk. I learned that even condemnation or ridicule were possibilities if my choices did not coincide with someone else’s expectations.

BELIEVE: to take as true or real, to have confidence in something or someone; to have faith, especially religious faith (Webster). For some of us, myself included, Faith of a higher power would be moved up to the front of that definition, and for Beverly she says, “For me, I believe has a significance far beyond simply believing that I can and will do what I set out to do. I believe that we are inspired and helped by God and that we have a responsibility to do our best to live up to that inspiration. I also get a sense of being assisted and directed by a Force beyond myself, and I desire that feeling.”

I Can, I Will, I Believe. I came out of that motivational seminar on fire. I bought the book. Heck. I bought the T-shirt. Honest, I really did. It’s royal blue with big bold white letters going right across my chest and anytime I need a little extra power pumped in to my self esteem I put it on and strut around.  All because she made my mother’s CAN & WILL tangible.

They say you can’t be a prophet in your own backyard. I guess I had to go far away and pay good money to hear what Mom had been saying all along.  I had to hear it from someone else to understand that the secret ingredient that made my mother stand so hard and fast is her faith. Belief in a higher power (God), Belief that she is doing what is right for her family, belief that if you believe in it, work hard for it, visualize it then you CAN make it happen.

By the way, that’s a far cry from stick it on a poster board, stare at it every day and sit back and wait for it to arrive. That would never be my mother’s style. While those that wait-are busy waiting, my mother and her clan are busy taking action and doing the WILL part and BELIEVING that with those two together…..why yes…yes you CAN!

**This post was rewritten from an original post from 2008 and is just as relevant today as it was then. This post is dedicated to my amazing mother, Bobbie LaBelle, who in her mid-seventies is still making it happen! She is my inspiration! I love you Mom!