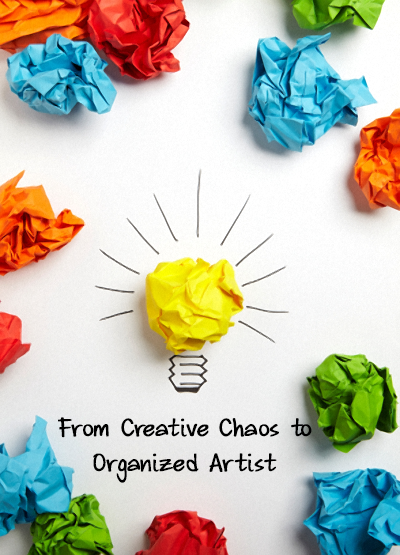 Clutter, Chaos and their best friend, Disorganization, are a gang I have been fighting with for years. I wasn’t born under that Lucky Star of Naturally Organized. I was born under the Star of Creative Artist and the two traits seem to be polar opposites.  Very few creative artists will tell you that it is in their natural make-up to have everything constantly spotless and some will even brag about how chaotic and dramatic their lives are at every turn.

I believed that about myself for most of my life. I accepted clutter and chaos as part of the creative process and even years into working as business entrepreneur, believed that clutter was simply the price we had to pay for the creative talent we are born with. I played catch- up with organization. I lived my life with tiny bits of post it notes. I fluttered and re-started every time the wind blew.  I defended my messy nature, and stood up for myself when the less creative (and much more tidy)  people tossed into my path tried to chisel out some clean space to do their linear thinking.

“You just don’t understand. I was BORN this way.  It’s part of being an ARTIST.”

Uh-huh. Well…It might be. But it isn’t part of making anyone a very good artist.

The truth is, I didn’t even start fighting with Clutter and his sloppy friends until I hit my thirties. Before that, I was too busy fighting with the people around me, defending my right to hold tight to these three renegades and claim them as allies.

I thought I NEEDED them. I honestly believed they were part of the creative process. My ideal impression of the successful artist was a struggling nomad, set apart from the disciplines and structures that “ordinary folk” had to endure. I was different. Any attempt to organize, systematize, or habitualize me was met with a swift retreat by my rebellious self.

I was having no part of it. Instead, I soaked my imagination with grand plans of all the brilliant, creative work I would produce SOMEDAY.  I would write a novel. I would learn to cook great feasts that my family would love. I would have a spectacular garden everyone would enjoy, every time they walked by. I would write great things that would inspire people from all walks of the world and help improve their lives.

I didn’t do a damn thing.

Except look for my missing stuff under piles of clothes and paper mountains. Order take out or make simple no-fuss meals in a kitchen better suited for a war zone. I piled on more and more commitments in hope that the NEXT ONE THING might be the solution to solving my lack of creativity and that finally, “Something would Happen”.

It didn’t. I was too busy struggling to survive my day-to-day self-imposed battle zone to give any attention to the Creative Dreams I had planned.

The Dawning of a New Life

I’d like to tell you that I woke up one day with an epiphany that with organization comes more creativity.

No, far from it. What really happened was that a change in my lifestyle happened when I turned thirty that lifted some of the constant daily struggle and strife from my life. I got married. I was no longer a single mother handling a full time job with two young kids and going to college. I had time- for the first time- to look around and pay attention.

Suddenly, there was space in my head and in my schedule.  I could make time for all of the hobbies and goals I had planned. But by then, horrible mindsets and habits had taken root in my head. I was a slob without a reason. I still believed I NEEDED to be one. So still…even though I had time, finances and ability, I still did…very little. I was out of excuses, and had nowhere to look but the mirror.

The realization was a slow dripping leak of sanity into my brain that has continued over a two decade  period. The Creative Chaos Mindset has been one of the most difficult mindsets I have ever changed.

When I was faithful to show up in a structured, disciplined way, each and every day, I was rewarded with an abundance of creative “gifts” that I was then able to spend time producing. When I had no schedule, I never “Got around” to creating.

The more I actually forced myself to sit down and produce, the more I was inspired to create, the more my confidence as an artist grew, and the more I really began to believe I was capable of creating great art.

It all began with an acceptance of the role that discipline, organization and structure had to play in the world of the creative artist. I discovered these…previous enemies of mine… were my greatest most reliable tools.

I had a new enemy to fight. Clutter, Chaos and Disorganization- instead of the rest of the world. It was a lot easier to take on three very specific enemies than fighting with everyone.

Have I learned to become organized overnight? Absolutely not. I am not suddenly that naturally born organized person that other people seem to be. However, I have created systems, rituals, habits, processes and tricks that help me function as the organized Artist that gets the job done.

Am I perfect at this? Absolutely not. But every time I fall off the wagon and find that chaos and clutter have gotten the upper hand, I have the tools to get right back on track again so I can focus on the most important goals to me. Creation.

Right where I wanted to be all along.